The Phantom Band The Wants Review

Second LP makes their debut seem like the sketchbook for a gallery of masterpieces.

You come to the second Phantom Band with high expectations. Not only was their 2009 debut Checkmate Savage an intriguing and beguiling mix of post-Stereolab krautrock moves and folkish croons, but the press release accompanying The Wants is a hoot, largely being a wry Mickey-take of the angst-ridden, "this album nearly killed us" shuck and jive favoured by the kind of indie-rockers that take themselves far too seriously. This Glasgow sextet gets the joke, which is always a sign of good taste and sharp minds.

But that still doesn’t prepare you for just how good this record is. The Wants makes Checkmate Savage seem like the rough sketchbook for a gallery of masterpieces. It also makes this year’s other British rock contenders look pretty damn silly.

The bar is set ridiculously high by an opener appropriately named after a mystical illusion. A Glamour begins with the scrapings of a West African balafon and synthetic winds. Pulsating synth crawls out of the fug, before thunderous battlefield tom-toms decorated by shocked electronic whoops. Then Rick Anthony’s voice: a deep, Americanised croon full of unlikely self-assurance. The feeling that you’ve been dropped into some night-time woodland pagan bacchanal is tough to shake. Yet every track on The Wants rises to A Glamour’s eerie yet alluring challenge and adds another layer of mystery, dread and esoteric influence to the story. Bands this eclectic and unusual are generally happy to stick with the wilfully avant-garde. The Phantom Band resolve all their wild ideas into big tunes with rousing festival choruses.

But what The Phantom Band actually do want is harder to fathom. Anthony definitely gets a case of existential lost love in The None of One, which is so beautiful it could be a missing Jimmy Webb song the band found under a tree in Kelvingrove Park. But the rest of The Wants is not an album to be pinned down to this meaning or that point. Perhaps the press release isn’t a joke, and this really is "the soundtrack to their own personal apocalypse". But isn’t that the best thing about truly great long-players? You get to spend many years of thrilled listening, trying to work out what something so rich, dark and powerful really, truly means. The Wants is one of those records. And there haven’t been too many of those in a while. 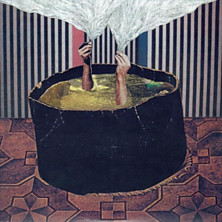