The Men Open Your Heart Review

These Brooklyn-based animal men are rocking for themselves, but we’re all invited.

Most artists think about things like cohesion and balance when putting an album together. The Men, instead, do whatever the hell they want. Just try to follow the twists and turns in this head-spinning synopsis of third album, Open Your Heart, and you’ll understand…

After the punk-rock romps of the two openers, Turn It Around and Animal, there’s a five-minute wandering thing called Country Song, which segues into Oscillation – a slow-building patina of samey guitars and propulsive percussion that only deigns to include vocals (spoken word) at the five-minute mark, before pushing on for two more minutes. Then we’re into washed-out shoegaze-with-a-dash-of-Sonic-Youth territory in Please Don’t Go Away, followed by the title-track’s fond nod to (okay, rip-off of) the Buzzcocks’ Ever Fallen in Love (With Someone You Shouldn’t’ve). Ants still very much in pants, they next try on a plodding, melodic Rolling Stones-esque country blues for Candy; then there’s the Black Sabbath head-banger Cube; another seven-minute, string-bending slow-burner in Presence; before we finish with the Trail of Dead-style bullet train that is Ex-Dreams.

What to make of this meandering patchwork? It should be incredibly frustrating. It should be a chaotic, disjointed mess. Somehow, though, it works. It’s difficult to explain why, but these tracks do hang together well. Perhaps it’s because they share the same soul.

There’s a disarming carelessness at the heart of Brooklyn-based The Men, a kind of primal nihilism that allows them to get carried away, and which carries away the listener. On Animal, they scream ferociously about being, well, animals – barely discernible howls of "give it to me" and "gimme a kiss" rising out of the mess as it hurtles full-tilt towards the climax – and it about sums the band up. They’re following their gut, doing what feels right. It’s an unbeatably rock’n’roll attitude, but unconsciously so, because if they were trying to cultivate an ‘image’ they’d surely expel the slower droning numbers that (happily) distract from their raw elements.

All in all, rather than insolently demanding your attention as most rock albums do, Open Your Heart possesses a wonderfully self-indulgent, insular quality. It’s not made for you but for them, you see, which makes for a surprisingly entertaining interior world, a place to get lost in. 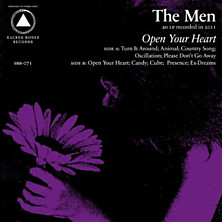