It contains an embarrassment of riches.

Complete & Unbelievable: The Otis Redding Dictionary of Soul (to give the album its full title) was the last solo studio album made by Otis Redding. Recorded throughout 1966, it demonstrates Redding at the peak of his powers. Working with Booker T and the MGs and the Memphis Horns, the close mic'd intensity of the album still stirs over 40 years on.

From opener Fa-Fa-Fa-Fa (Sad Song) onwards, this is premium Redding. The blend of keening horns, his pleading vocal style and an excellent selection of material highlights the album's passion and relevance.

Day Tripper continued his fanbase-expanding way of taking contemporary UK invasion material and turning it into something southern and deeply soulful. Like he had done with the Rolling Stones' Satisfaction the previous year, Day Tripper, always a fairly minor Beatles single, is turned into a swaggering stomper. The Memphis Horns make mincemeat of George Harrison's principal guitar riff.

Try A Little Tenderness, outside of (Sittin' On) The Dock Of The Bay will be the track for which Redding will be most remembered. Although here amid excellent company, it towers above the album, and indeed his career, with a performance of such controlled intensity that it still has to be heard to be believed. With every turgid sub-Commitments/Blues Brothers cover version of this, the original just gets more pristine, more sacred.

With these tracks nestling among fantastic Redding originals such as Ton Of Joy, Hawg For You and I'm Sick Y'All, Complete & Unbelievable: The Otis Redding Dictionary of Soul contains an embarrassment of riches

It was in 1967 when Redding began to go global – his performance at Monterey Pop Festival and the success of the European Stax/Volt Tour saw this album's material being generously showcased. We all sadly know what happened next. The vibrancy and variety of The Otis Redding Dictionary of Soul means that he continues to be such a strong influence on music and vocal performances so many decades later. 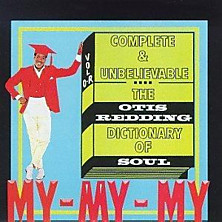