Rarely receives due credit as John’s finest work by a distance.

The first album ever to enter the US pop charts at number one, Captain Fantastic – an unabashedly autobiographical concept album – rarely receives due credit as John’s finest work by a distance. The last for many years to feature his heyday band line-up, it sees Bernie Taupin’s lyrics rattling through memories of his and John’s "years of struggle" as a frustrated songwriting duo before gargantuan success arrived. Any act essaying such indulgence would be laughed out of town nowadays: in May 1975, an era of glam peacocks and spectacular showboating, it made sense. While scarce on hits, it features, in Someone Saved My Life Tonight, the singer’s greatest moment. Both John and producer Gus Dudgeon have hailed this as the best Elton album.

The narrative guides us through the rise to fame of Captain Fantastic (John, obviously) and his pen-bothering, Western-fixated sidekick as they fight to pay the rent in London in the late 60s. Taupin focuses on reality here and, while hugely narcissistic, draws his most acute, affecting creations. John, for his part, knocked out the music while on a cruise, but his chords are at their most intimate and moving, particularly on the closing double-whammy of We All Fall in Love Sometimes and Curtains. They echo the portentous mood of Someone Saved My Life Tonight, which reveals how Long John Baldry talked Elton out of an ill-advised engagement to Linda Woodrow (who is spared no acrimony by Taupin, in astonishingly vicious couplets), and touches on John’s 1969 suicide attempt.

There are sparkling pop songs here too – Bitter Fingers, Better Off Dead, the sugar-coated country of Writing. But the overriding feeling one takes from the colourful, theatrical, Captain Fantastic is that this is the big artistic statement that Goodbye Yellow Brick Road was touted as. It’s extraordinary that a pop star then on top of the world found the wherewithal to carve out such candour. And it’s ironic that the John-Taupin pair then descended into blandness and self-parody for years. They revisited these themes with a kind of sequel in 2006’s The Captain and the Kid, but by then they’d long since lost it on the wind. 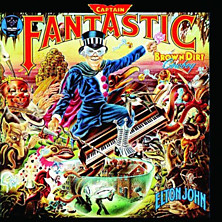