A deeply exciting, original and inventive debut from recommended ones to watch.

It’s hard to place Alt-J. Originally from Leeds, they spend their time in a Cambridgeshire basement making their own brand of uniquely dubbed "folk-step". However, the noises that An Awesome Wave emits far escape the dull, dark depths such a creative location suggests. Instead, it’s a stunning and encompassing affair of both innovative and electrifying musicianship and exemplary song writing.

Comparing Alt-J to contemporary artists or listing their influences is almost pointless. Each song blurs, stutters, and explodes across a tide of instruments and ideas, fresh and addictive. Breezeblocks is early Mystery Jets with Orange Juice choruses while Dissolve Me is post-Skins generation Foals cuddling up to Fleet Foxes by the campfire. It has moments of slick RnB, gorgeous folk harmonies, and even a choir of children glossing nostalgic school memories.

This album spans every workable idea, genre, and influence that can be crammed under the guitar music umbrella, yet it never feels disorientating. Instead, what swoons gracefully through speakers is an entirely comprehendible and accessible collection of beautiful pop songs.

Movement is key on this album. Samples and sounds cascade and cross with elegance, but it’s Joe Newman’s lead vocal that acts as the cement, pulling everything together and guiding it seamlessly into making sense.

Even the lyrics are creatively ambitious. On Breezeblocks he cracks, "She may contain the urge to run away but hold her down with soggy clothes and breezeblocks / Germolene, disinfect the scene, my love." It’s not your usual Valentine’s note but it’s their way of taking on the old in a new way that really marks An Awesome Wave as a deeply exciting record.

Okay, it’s not that Alt-J can’t be pigeon-holed or placed beside peers; it’s more that they deserve more. This debut offering is strong, addictive and enthralling, the perfect accompaniment to any mood, any moment, anywhere. 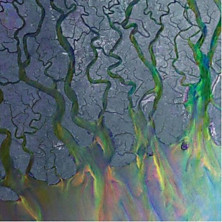