Extreme noise terror from the ever popular Masami Akita (aka Merzbow) and partner in...

On this eponymous release for Warp records, Masami Akita and Russell Haswell unleash a set it would be unwise to call music.

As the title suggests, this is a scummy hellbound racket, however, it's not to be mistaken for infantile din making. It's clear from the start that a great deal of skill has gone into making this recording.

Russell Haswell is a multidisciplined artist who has toured with Autechre and performed with Aphex Twin as a DJ of sorts - playing everything from Fischerspooner to the blackest metal engulfed in swathes of filthy noise and feedback. He has also recorded a retrospective catalogue of live recordings on the Viennese electronica label Mego.

Masami Akita is the "Godfather" of Japanese noise. In 2000, under the name Merzbow, he released a 50 CD boxed set called the Merzbox, and has released more than 200 recordings to date. He has also written scholarly workson subjects such as Japanese bondage and post war Japanese architecture.

This is their first recording together after performing live on several occasions under the Satanstornade name. including the Sonic Youth curated All Tomorrows Parties in Los Angeles.

Instructions on the sleeve suggest headphone listening at maximum volume. Although this might result in early deafness,it's the best way to engage with the almost sculptural, grimy maelstrom the duo deftly summons. At this volume and intensity you are pulled headlong in and forced to feel the noise.

Track one "fend off your miserable grief" sounds like a drag race in an electric storm. Relatively short at just under three minutes, it's either a bracing opener or a warning of the madness ahead.

The fantastic 17 minute epic second track "unlock the mysteries of the sun" has all kinds of upper register drones, squeals and hisses launching off at hyperspeed, anchored only by a crushingly low looping bass guitar riff that could have been borrowed from "ambient metal" bands like Earth or Sunn 0))).

Given the material this CD is built from, a first time listener might expect to feel the kind of aggresive catharsis induced from engaging in other forms of extreme music, but oddly (perhaps because of the absence of drums), the more you're immersed in the chaos tearing around your cranium, the more you submit to it with an almost Zen like calm.

After listening under headphones for the entire 47:37, I felt shock at the quietness around me ast he CD finished. Surely the dark lord works in mysterious ways. 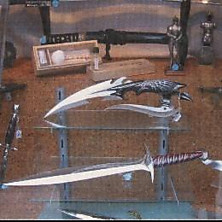