A delightful debut album which tinkles and buzzes, chimes and crackles with real promise.

By doing a lot of little things well, without making any grand gestures, Glasgow duo Conquering Animal Sound have here crafted a delightful debut album which tinkles and buzzes, chimes and crackles with real promise. It feels like a debut as one senses there’s plenty more to come – but at the same time, it’s a satisfyingly complete listen, a fully rounded full-length which rewards repeat listens with the discovery of charming new details and nuances.

Anneke Kampman provides the vocals, and they’re the same soft but skittering kind that have guided Hanne Hukkelberg to no little acclaim. They convey warmth, comfort – but there’s something cool about them, too. Something that, if the press release didn’t state this band was from Glasgow, you’d swear was Scandinavian – or that CAS were Icelandic peers of múm. In the music, too, there’s evidence of influence from icier climes than the streets of Scotland’s largest city; the same clicks and chirrups that coursed through the experimental electronica of The Knife’s Silent Shout. Domestically, CAS can be heard in the same bracket as labelmates worriedaboutsatan, too – both use circuitry to create something rather more organic than many IDM-minded sorts – and even James Blake, whose album-preceding piano works really showcased his tender side.

So there are plenty of parallels to be drawn, then. But just because CAS – whose other member is James Scott – have the listener reaching easy comparisons, they should be celebrated for pulling together a collection of constituents into a cohesive end product which genuinely warrants investigation by those whose curiosity might’ve been piqued by the aforementioned references. And beyond, too, as there’s nothing here that a fan of The xx would struggle with – the similarity less a compositional one, more a common mood that’s established across the album’s length. Crawl could be The Delgados – the much-missed Hamilton quartet – as remixed by the in-demand Jamie xx; and Wasp conjures a similar brew of magic and menace, albeit underpinned by gorgeous vocals.

Elsewhere, CAS’s past form as stage-sharers with Tunng is qualified, rather, by the woozy electro-folk of Giant – toy pianos straight from the music box vibes of Björk’s Vespertine– and Neanderthal’s hypnotic accordion loop (sampled or straight, it works). Granted, Kammerspiel – a German film movement of the 1920s – isn’t the soundworld-defining/establishing release its makers might have hoped for; but there’s so much here to congratulate them for, that anticipation for a step-forward sequel should soon start building. 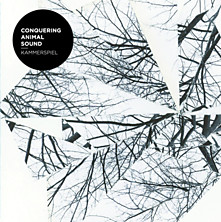