The most exciting and substantial Coleman release of the last few years.

New York alto saxophonist Steve Coleman has pared his long-running Five Elements combo down to a pointed quartet, ditching the trimmings that have decorated recent incarnations.

This enables a particularly hardened cerebral-funk manifestation of Coleman’s M-Base sound. Actually, he insists that this isn’t a musical style, but rather an attitude behind its creation. Just as well, as in similar fashion to fellow altoman Ornette Coleman’s harmolodics method, nobody has ever adequately explained the ground-rule parameters of the form.

Adding to this album’s conceptual heft, Coleman has improvised whilst pondering the body’s inner mechanisms, the way that necessary functions intersect during their daily motion: as if brain, heart, lungs, bowels, blood and sputum were the very embodiments of different musicians.

Then, he transcribed these (usually solo) results, passing them on to the band and forming them into full compositions. These realisations combine studied patterns and progressions with a lusty means of expression, mixing stern logic and limber intuition.

The tight convolutions of Sinews feature cool-school alto writhing on a bed of tensile bounce. A warm bass bulge sags under the taut viscera of the horns, intricate drum cycles locked precisely with skins and hi-hat chattering.

Five tracks feature the guitar of Miles Okazaki, joining Coleman, trumpeter Jonathan Finlayson, electric bassist Anthony Tidd and drummer Sean Rickman. These in particular invoke the sound of Ornette’s guitar-laden Prime Time outfit. Finlayson has frequently partnered with the younger altoist Steve Lehman, who could himself be viewed as a (Steve) Coleman descendant.

These 14 pieces are relatively short, in jazz terms. The horns speck their melodies in fractured tandem on Medulla-Vagus, sparring closely across the tune’s thickly extruded bassline. There’s a gentler spaciousness to Chemical Intuition, which could almost qualify as the album’s ballad, with its searching, questioning quality.

Cerebrum Crossover has a cascading woodblock ricketiness, with a disjointed fanfare of horns using teamwork to assemble the theme, sharing the phrases with a dialogue of construction. It’s a strangely-coordinated procession. Then, the warlike tumble of Cardiovascular makes its chase of colliding corpuscles.

This is the most exciting and substantial Coleman release of the last few years, rigorously challenging, pumped with insinuating melodies, sleek with propulsive energies and pulsating with a uniquely globular funkiness. 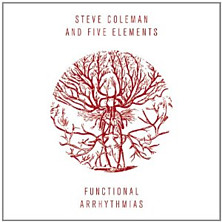