With the critical mass now in her favour, a commercial breakthrough seems inevitable for St. Vincent, known otherwise as Annie Clark: poster girl for indie rock, former member of Sufjan Stevens’ touring band, beloved of Bon Iver, Grizzly Bear and Andrew Bird. Her two previous albums have revealed an intelligent, offbeat but charming talent, and her live performances – both with a band and solo, surrounded by loops stations and echo boxes – have proven her an impressive musician. Furthermore, her feminine side is matched by an ability to play the boys at their own game – her recent virtuoso live cover of Big Black’s Kerosene sees her shred as effectively as anyone – rendering redundant lazy comparisons with the traditional canon of female performers.

Strange Mercy, however, is a little underwhelming, full of ideas but struggling to find a coherent voice. Her charismatic performances still exhibit the trademark confidence that makes her so intriguing, but the album’s songwriting fails to deliver a standout track like Actor Out of Work or the eccentric, disorientating Marrow (both from 2009’s Actor). There are flashes of brilliance throughout, but opening track Chloe in the Afternoon – in which guitars crunch against woozy fairground keyboards and a stuttering, programmed beat until Clark attempts clumsily to cram the song’s title into the chorus – does her no favours.

This is especially frustrating when she follows it with Cruel, a far more rounded, melodious track full of Disney-esque strings, galloping but simple rhythms, fuzzily ripped guitar lines and Clark’s tender but never reticent vocals. Northern Lights is grittier, guitars grating against a persistent snare tattoo, Vincent’s vocals heading into ethereal realms as noise bursts around her, while Hysterical Strength further confirms her instrumental prowess. Surgeon, too – which opens with a tip of the hat to John Barry’s You Only Live Twice – is a moody and atmospheric song that takes unexpected turns, especially its weird foray into the kind of synth-pop perfected by Wally Badarou in the 1980s.

But throughout there’s a distance between performer and audience: despite being teased by notable lines like "I don’t want to be a cheerleader no more", "If I ever meet the dirty policeman who roughed you up" and ‘Oh, America, can I owe you one?" it’s hard not to feel cheated by irritatingly impenetrable lyrics like "By your heel heal my hurt horse hair whip be your floor", as though she daren’t let us get too close. Champagne (with its melodic reference to Leonard Cohen’s Hallelujah) and Year of the Tiger prove that she can be smart as well as approachable, but ultimately Strange Mercy sounds like her best record still lies ahead, once she feels a little more at ease with balancing her obviously multiple talents. 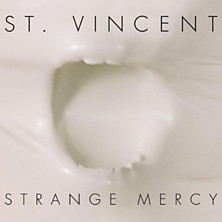