The most perfect example of Blondie's grafting of sixties power pop with new wave, Parallel Lines was one of the biggest hits of 1978/9. Supremely assured, the group was unafraid to go disco, go art, or just play fine, fine pop.

After years in the business, Debbie Harry was street-wise, confident, completely in control. Thousands of teenagers were enraptured – boys wanted to be with her, girls wanted to be her. With her musical partner Chris Stein, they created intelligent pop that referenced all of their 60s favourites, while embracing the CBGBs punk scene in New York that the group had grown out of. Working with British bubblegum producer, Mike Chapman, they selected material which played to the group's strengths. Chapman had co-written glam classics such as “Blockbuster” by Sweet and “Tiger Feet” by Mud, so was well-trained in spotting a great pop tune when he heard one. And hear them he did, with Stein and Harry dipping into a catalogue of songs, with contributions from the rest of the band and songwriter Jack Lee, who contributed the unforgettable opener, “Hanging On The Telephone.” To underline Blondie’s art background, Robert Fripp was also on hand, contributing guitar to the brooding “Fade Away and Radiate.”

But no-one cared much for the art when the pop was this flamboyant. Containing the No.1s “Sunday Girl” and disco-pastiche turned disco-classic “Heart Of Glass” as well as “Picture This” and “Hanging On The Telephone”, Parallel Lines, with its iconic cover imagery, was a permanent fixture in Britain in the late 70s. It went to No. 1 in the chart on 17th February and remained there for four weeks, staying on the listings for 106 weeks in total. 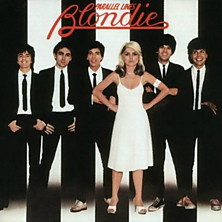