This disc proves that music doesn't have much truck with geopolitics.

In the 1970s there was no 'world music'. Benin was a Marxist republic recently born out of Dahomey and Togo was in the first decade of what would turn out to be the epic dictatorship of General Gnassingbé Eyadéma. Unless you were born in one of these countries, you’d never have got to hear the voodoo funk music that was being conjured up in what must be two of the richest cultural melting pots on the planet.

Fusion is almost as abused a term as folk. But this is what it sounds like. Pick a track. Mi Kple dogbekpo, the opener, has Cuban brass, a Congolese chorus, a psychedelic riff shaped solely for shaping. On the next one, Mi Ma Kpe Dji, the spirit is blues, but moulded by James Brown and Nigerian High Life. It's A Vanity is more soul, more sex. The band on this, as well as two other tracks, is the Orchestre Poly-Rythmo de Cotonou, who took the Afro sound to new levels by ensuring that even while they copied Western rhythms, there was always a fiery injection of Beninese passion or, when relevant, politics. Their big hit, Gbeti Madjro – track five here – was written during a period of turmoil and stirred up its own revolution in the local music scene.

Ouidah, on Benin's Atlantic Coast, is home to a large Brazilian community – the Agoudas, descendants of slaves who returned from Brazil at the end of the 19th century. They brought back dances and proto-samba sounds, which worked their way into the mix in the 70s.

These artists also heard French chanson, Johnny Hallyday – an icon in the West African university scene – US funk, as well as local rhythms on the radio. Out of this chaos, comparable at the time to the far more widely known Brazilian coastal music scene, came great riches. Everything, somehow, gels. Why, it's harder to fathom. Few of these musicians were trained, and all had to learn how to blast their way through out-of-tune solos and off-beat drummers. Perhaps it's the screams and the psychedelic state that holds together the random elements and disparate talents. After all, Benin is the birthplace of Vodun, as in voodoo, which was all about melting pots and losing yourself in wild traditional rhythms such as Sakpata, Sato, Agbadja, Tchenkoumé, to name only a few.

Africa Scream Contest – what a title – is the third compilation to come from Analog Africa compilation. Like the others, this disc proves that music doesn't have much truck with geopolitics. When New York slicksters thought they were at the centre of the universe - Studio 54, say – these bands were taking the coolest parts of funk, soul and disco, reinventing it and, at the same time, transforming their own music and culture. A lot of the reaction to West African blues has focused on origins and a going-back-to-roots, but the groove in Benin and Togo was far deeper and far more inventive than that. 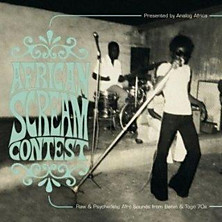