The Doors Live at the Bowl ‘68 Review

Love or loathe The Doors, this will polish the windows of your perception.

On 5 July 1968, The Doors celebrated their own independent streak with a performance at the Hollywood Bowl which, like most things they did, has since passed into rock lore (and not just because Mick Jagger was in the crowd).

While parts of it have been released before, this is the first ever CD/vinyl (and DVD) release of the entire show, from intro to, inevitably, The End. Modern technology has found a way to clean up tracks previously considered poorly recorded, including Hello, I Love You and Spanish Caravan. It’s a reverent restoration job.

At the time The Doors, in their third year, were on an almighty high. Hello, I Love You was a Kinks-influenced radio staple racing towards No.1. The band grasped the show’s importance and, unusually, rehearsed (something they rarely did). It shows in the pacing, as crowd-pleasing, beefy 12-bars rein in Jim Morrison’s poetic, sometimes indulgent ramblings just before they tilt into self-parody.

What shows less is that the band took LSD before going onstage: Morrison sounds relatively cheerful, as if he’d had a big bag of barley sugars. If the musicians were all off their trolleys, one can only assume that rehearsals led to impeccable muscle memory. Ray Manzarek recalled they were “locked in”. Drummer John Densmore had even insisted on a planned set list, to be adhered to (again, something usually anathema to The Doors). There is a crisp, tight zip here, not always evident in the group’s cooed-over canon.

Possibly some of that is down to the new mix and edit. During Light My Fire you can hear firecrackers exploding: it sounds, as they say, like you are actually there, among the 18,000-strong congregation. So from the swing of When the Music’s Over and the sleazy lilt of Brecht/Weill’s Alabama Song, this is a band delivering, knowing they’ve arrived, swaggering without slobbering.

Moonlight Drive and Horse Latitudes are allowed to gleam and the night gathers momentum until that mother of all comedowns, The End, puts a wail in the tail. Love or loathe The Doors, this will polish the windows of your perception. 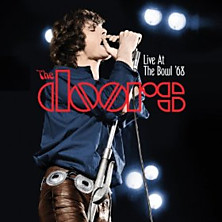