A sober and smart record – his finest since 1999's I See a Darkness.

This is, quite spectacularly, Will Oldham's 21st solo album — his 12th under the guise of Bonnie 'Prince' Billy. That any artist should be so prodigious is striking; for so much of Oldham's work to be so exceptional is even more remarkable. Of late, the tone of the one-time Palace Brother's recorded material and his live shows has been marked by a certain levity and, at times, jocularity, and so one might anticipate that Wolfroy Goes to Town would toe a similar line. In fact this is a very different kind of beast: sober, smart and his finest record since 1999's I See a Darkness – perhaps the work with which Wolfroy shares most in common.

For all the charm of Oldham's sunnier compositions, when he returns to more subdued territory he proves unfailingly spectacular. There is something in the frail, bruised tone of his voice, in the melancholy twist to his lyrics, which never fails to convince or seduce. The lonesome, disconsolate thread that runs all through New Tibet, Cows and There Will Be Spring seems to culminate in the slow, dull ache of We Are Unhappy: "Mind is going, faith is destroyed / Emptiness showing, God's cruelty deployed / Lovers have left, friends close their eyes," mourns the verse. "We are unhappy," pines the chorus. "We are unblessed."

Throughout, BPB is accompanied by long-time sidekick, guitarist Emmett Kelly, who brings an earthy warmth to the forlornness, and backing vocals are provided by the wonderful Angel Olsen, who serves to underscore the wistfulness with her loon-like call. There are brighter moments here, too: the staggering blues of Quail and Dumplings stands as the album's sole party number, though there is sweetness to be found elsewhere – in the waltzing opener No Match, for instance. But for the most part these songs stand in the cool, sudden shade of Godlessness. "Stop all the moaning / And bemoaning of fate," he concludes in Time To Be Clear. "God isn't listening, or else it's too late." 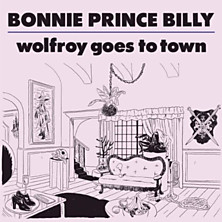