Heritage will surely be seen as one of their most accomplished works.

News about Opeth ditching metal for the prog world for their 10th album has been greatly exaggerated. Yes, it’s an eye-catching story that reflects their progression, but the Swedes are as heavy as they’ve ever been. Whatever you may have been led to believe, a band does not need death metal vocals to be heavy. If 2003’s Damnation wasn’t enough proof of that, the 57 glorious minutes of Heritage present another opportunity for doubters to be won over.

Obviously, opening with two minutes of freeform pianos doesn’t really help the argument against a massive progression towards certain 1970s rock tendencies; but the title-track really is the most outlandish number on the album. With its clean, vintage guitar sound and organs, next cut The Devil’s Orchard immediately provides a punchier vibe, and suddenly we’re no longer walking through a psychedelic time warp with our shirts unbuttoned to the navel. Songs like I Feel the Dark and Nepenthe introduce a darker tone, and the album really starts to feel like home. It’s comfortable, it’s gloomy... it’s Opeth.

But what’s this? A jazz flute solo in Famine? The track’s no Jethro Tull collaboration, but one could be forgiven for leaping to such thoughts. But as it stretches across eight minutes, the song allows more than enough time for a superbly heavy section, which duly arrives towards its end. Lead vocalist Mikael Akerfeldt has been quoted as describing this album as sounding like Opeth, pure and simple, and it really does: Damnation was quite clearly the sum of their 70s prog influences at the time, and tended to plod along without a fully developed identity, but Heritage is quite distinctly an Opeth album. The creativity and darkness most readily associated with the band is melded with the now-standard symphonic influences to create what might what might be the most well-rounded Opeth release to date.

If all you want is straight-forward death metal and savage growling from Akerfeldt, you might not want to step out of your comfort zone with this album. But Opeth’s determination to create new music and never stand still has seen them shape and inspire heavy metal for the past two decades. With several groundbreaking albums already ensuring a strong legacy awaits them – records that should already be in your collection – Heritage has some strong predecessors to live up to. But it will surely be seen as one of their most accomplished works in years to come. 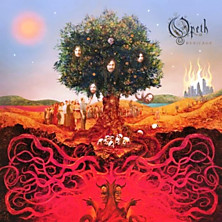