Another lesson in modest brilliance from the former Brit and Mercury nominees.

They creep up on you, Guillemots, as the best music so often does. There’s no boasting, there are few brash novelties – unless you count their plan to release four albums in one year, of which this is the first, a record released without any word of warning – and, if they’ve been slung out of Soho bars late at night, the news has never made the headlines. Their music, however, is full of a sophisticated charm that sidles quietly into one’s heart before quietly whispering that it’s arrived. That’s the music that often stays the longest.

Hello Land! was recorded at an undisclosed mountain hideaway in Norway, and the environment seems to have lent these eight songs a genuine pastoral calm. That’s especially apparent on Outside, which begins with the sound of feet trampling the show, and the nine-minute Byebyeland, an instrumental that might be considered shoegaze it if weren’t perpetually staring at the stars.

Nothing here lacks the ambition and arrangements that have characterised the band’s career to date. Founder Fyfe Dangerfield’s classical training continues to flourish: the album wafts in on reverb-drenched guitars and gentle breezes of flute (courtesy of the Norwegian Flute Ensemble) before Up On the Ride gets underway, Dangerfield’s restrained falsetto floating atop intricate instrumentation ready to warm those longing for Radiohead to return to the heartfelt sentiment of The Bends. It doesn’t take long, however, for the track to transform into the kind of joyous indie pop perfected by The Magic Numbers, and a similar trick is undertaken on Fleet, which evolves from its sparse, pastoral introduction into a white soul tune, complete with funk guitars. Imagine something The Blue Nile might have recorded had they not been so despondent.

Nothing’s Going to Bring Me Down could also merit a Blue Nile comparison, its sincerity unquestionable, Dangerfield’s voice imbued with the same sense of comforting, you’re-not-alone longing as Paul Buchanan’s. Southern Winds, though, is more reminiscent of David Crosby’s early solo work, or even Simon & Garfunkel, its acoustic guitar nestling amid flutes and the incongruous pop and crackle of vinyl. It’s this sense of the unexpected that makes Guillemots such a treasure: they don’t beg for attention. They simply deserve it. 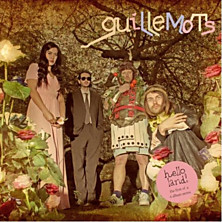