The third in Strut Records' Inspiration Information collaborative series pairs Mulatu Astatke, 66-year-old father of Ethio-jazz, with London-based astral funk collective the Heliocentrics. The collaboration began with an appearance at London club Cargo in 2008, and has finally borne recorded fruit in the form of an intriguing album that's equal parts sweaty funk and blissfully meditative jams.

Astatke has come to be appreciated outside specialist circles in recent years. His music featured heavily in Jim Jarmusch's 2005 film Broken Flowers, and before that, in 1998, an entire edition of the Ethiopiques album series was devoted to his work. His sound intertwines funk and jazz elements with traditional Ethiopian folk melodies and echoes of Coptic Church music. Astatke's compositions frequently combine his own vibraphone and conga playing with the distinctive sound of the lyre-like krar, which works with five tones instead of the seven-note scale typical of western music. These disparate elements combine to create a heady blend that feels both sacred and profane.

That paradoxical effect holds sway here, with the Heliocentrics adding a glitchy sheen. Their most noticeable contribution at first is the sheer power of the drumming, which on sleazy jam Addis Black Widow and the funky sax-led Fire in the Zoo have an almost breakbeat-like heaviness. Elsewhere, however, they conspire with Astatke to far subtler effect. The electronic effects flecked between the meandering bass, spiralling strings and washint (an Ethiopian flute) passages on An Epic Story are no less compelling for being down in the mix.

There are times when the partnership falters. Blue Nile dips its toes into forgettable downtempo territory, and the closing ten-minute sprawl of Anglo Ethio Suite doesn't build much beyond a promising opening. The good outweighs the bad, however, especially on the woozy stagger of Chik Chikka and the Alice Coltrane-style oddness of Phantom of the Panther. Best of all is Live From Tigre Lounge, where metallic beats combine with a sinister organ and distant howled vocals above a bassline that sounds like its wandered in from an early-1990s hardcore record. At times such as these this project makes perfect, unexpected sense. 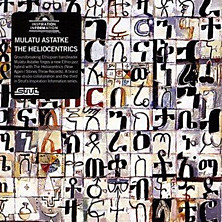