Keane’s fourth LP is best when it stops trying to do ‘epic’, and gets nostalgic.

It doesn’t get much more play-safe and back-to-basics than this. 2008’s Perfect Symmetry saw mega-selling East Sussex band Keane surprise sceptics with a galvanised twist of electro-pop, retro-tooled to emulate early Simple Minds. Arguably they did this with more guile and pizzazz than The Horrors, but the band's fans may get whiplash as Strangeland, belying its title, is an unabashed scurry back to the comfort zone.

Sweet, unthreatening melodies abound, then, sung with porcelain-choirboy competence by Tom Chaplin and written and arranged by Tim Rice-Oxley, whose keyboards dominate. While he finds enough effects to vary the tone, there returns a sense that for all their tugs at emotion, Keane lack blood, guts and muscle. There’s a nod at Radiohead on Black Rain, and On the Road is proud of its peppiness; but most songs blur into a faint facsimile of Genesis’ 1978 hit Follow You, Follow Me or slide cosily into the wistful, mid-tempo ballad shapes patented by U2 in the 90s.

It’s textbook-inoffensive, though a couplet in the single Silenced by the Night, a kind of toy-town Echo & The Bunnymen, smothers you in cliché-cheese: “If I am a river, you are the ocean / Got the radio on, got the wheels in motion.” They’re more palatable when waxing nostalgic about their teenage years, a recurring theme, and on Sovereign Light Café – “We were friends and lovers and clueless clowns” – convince with Springsteen-esque romanticising of youthful frustrations. They achieve more grandeur when taking the foot off the ‘epic’ pedal than when blowing hard.

Recorded at Rice-Oxley’s studio with producer Dan Grech (Radiohead, The Vaccines, Lana Del Rey), and now a four-piece with bassist Jesse Quin a full member, the piano-rockers can’t be too carped at for doing what made their name. Yet those glimpses on Perfect Symmetry of something flashier and sexier make this retreat to familiarity a somewhat saddening step backwards. 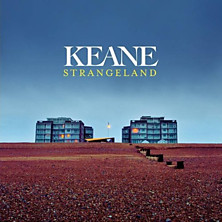