Big, untamed and full of raw energy, this is the man letting go of his controls.

SBTRKT’s eponymous 2011 debut met with intense critical acclaim, but the London producer – real name, Aaron Jerome – has yet to author a follow-up. In its absence, Young Turks release this set, recorded live at Shepherd’s Bush Empire in October 2012, featuring a couple of previously unreleased tracks.

Jerome’s meteoric rise from remixing Radiohead and M.I.A. to featuring in many of 2011’s end-of-year lists was quite surprising. Early releases showed a deft hand at the decks, his subtle tinkering with repetitive melodies curious, if not likely to attract a wide audience.

Taking recordings to a live environment – especially one as theatrical as the Empire – is frequently a challenge for electronic artists. And given the tightness and intimacy of his debut record’s production, the wisdom of a SBTRKT live album was debatable.

It’s a different experience, that’s for sure. With live drums, prominent synths and Sampha stretching his voice to fill the larger space, it initially sounds like a disappointing attempt to fit in with the dance-cum-indie zeitgeist.

But further listens bring pleasure at LIVE’s reinterpretation of SBTRKT favourites. Never Never builds on rattling percussion before the Heritage Orchestra shows up with an unexpected lavishing of lugubrious strings.

Sampha turns out to be a real crowd pleaser, his “You’re giving me the coldest stare” echoing to obscurity before Hold On segues into new piece, Migration.

SBTRKT’s debut was built on a crisp, finely crafted sound; it seemed to thrive on its confident precision, its clarity of purpose. LIVE is its inverse: big, untamed, full of raw energy. And yet it works. It’s the man at the controls letting go, allowing his tightly packed songs to unravel before us, the privileged witnesses. 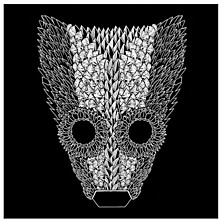