The big question is: who is this album for?

Uneasy Listening Vol. 1; not the greatest of album titles, is it? An album of everyone’s favourite songs by happy goth-metallers HIM reworked; but in what way? New-rave versions of their music or how about a hip-hop version of “In Joy and Sorrow”? Turns out HIM have gone all romantic on us and have unleashed a loved up album of their songs re-worked to a much softer effect

Ville Valo has claimed this is an album for the girls…and he’s not wrong. You can imagine a dejected she-Goth wistfully staring out of her window at the rain pining for her he-Goth while Uneasy Listening Vol. 1 plays.

It is fair to say that some of the songs hit the mark. “Close To The Flame” throws up images of, dare I say it, Jeff Buckley and “Gone With The Sin” is a majestic piece of music, lush with strings and vocals at their most sensitive all understated and slight.

The problem is that Uneasy Listening sometimes is exactly that. Too often does HIM try to re-work a song that did not need to be re-worked and some songs just come across as a joke. The vocals on “It’s On All Tears” are painful to listen to: much more than uneasy with Ville’s voice pitching all over the place above music which sounds like Hank Marvin and The Shadows. Meanwhile “When Love and Death Embrace” is three minutes fifty of AOR …which should strike fear into the heart of any music fan.

The big question is: who is this album for? HIM fans will already have much of these re-workings on special edition singles and those wanting to get into HIM should steer clear and aim for their earlier stuff such as Razorblade Romance or pick up And Love Said No. Let’s just hope the ‘metal’ Volume 2 is not quite so uneasy on the ears. 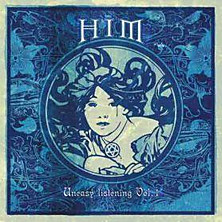