Here’s a game: try and imagine what this Leona Lewis album sounds like, based on your knowledge of her previous work. Finished? Congratulations! You’re absolutely right.

And of course, this creates a problem for anyone hoping to take her career in new directions. Over the course of these 12 songs there are all sorts of production nods to happier music: the dubstep drop (Glassheart), the ticky breakbeats (Come Alive), the thick shag pile bass on the up-tempo numbers (note: there are no up-tempo numbers, there are only the not-ballads). But sitting on top, as always, is the eternally downcast Leona, the sensitive flower with the elephant bellow.

Even on Fireflies, the only chipper-ish moment in the whole collection, she sounds devastated – by beauty, in this case. That’s her natural tone of voice.

So of course the songs that tend to fly best, on their own terms at least, are the uncluttered muscle ballads: When It Hurts, Fingerprint, Un Love Me. How very expectable.

But then there’s Trouble. It’s the sole song that suggests Leona is an active participant in her own misery, the only song that takes her mournful wail and puts it somewhere new – in this case, a stern lesson in the power politics of a love gone bad, resting on a pillowy base of Massive Attack strings. Taken straight, or with a bitter twist of Childish Gambino, it’s a powerful draft.

Four or five more songs like that from contributing writer Emeli Sandé, maybe a collaboration with Jessie Ware, and this would feel like a fresh start. As it is, it’s simply the next Leona Lewis album. 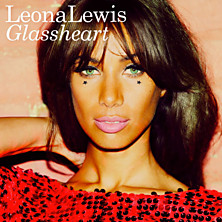