Reality is a proper album, with a beginning, a middle and an end.

Each David Bowie album from Black Tie White Noise onwards has been greeted with a huge puff of publicity but very little aftertaste. This is as much our fault as his. In our long-established immediacy culture, unless you are repeatedly whacked around the head by something, it evaporates. The complex and distant music Bowie has produced over the past ten years often demands the one thing we don't have in abundance today: time. To underline the importance of his recent oeuvre, Bowie played Heathen in a block, as if to say; this is really special, bear with it.

With that in mind, I'm delighted to report that his 25th studio album, Reality is among his very best works, and this is being written not in the exhilarating judgement-numb of a long-in-advance copy. This is after living with it. Its rock music, for sure; it travels along similar lines to Heathen and Hours..., but it has a real freshness and accessibility and, in this era of ever-extending CDs, it's a proper album; clocking in at under 50 minutes.

Working with Tony Visconti again has certainly given energy to Bowie and working in Visconti's small studio in New York brings the work a real freshness and intimacy. With his regular players Sterling Campbell, Gail Ann Dorsey and Mike Garson; and with Visconti playing his economical and often underrated bass, there is a beautiful lustre to the sound which manages to embrace innovation in a most organic manner.

'New Killer Star', freely referencing his own 'TVC 15', is an effortless overture that plays to the highlights of the Visconti/Bowie partnership. 'She'll Drive A Big Car' is a perfect embodiment of Bowie's new spirit; full of subtle kinks and nuances which actually finds it recapping Young Americans in terms of that records emotional drive.

The backing vocals on 'Looking For Water' equal the strengths of the Berlin-era recordings and the strings-rich cover of 'Try Some, Buy Some' is a fitting tribute to its author, George Harrison. 'Fall Dog Bombs The Moon' is a fantastic voyage through Bowie's Burroughsian box of tricks and 'Bring Me The Disco King' first mentioned at the time of Black Tie White Noise is a extraordinary closer, its refrain evoking both Chic's 'Dance Dance Dance (Yowsah, Yowsah, Yowsah)' and Joy Divison's 'Transmission'; a woozy, off-kilter jazz homage, with long term Bowie pianist Garson referencing his best work.

So, Reality is a proper album, with a beginning, a middle and an end. It's direct, warm, emotional honest, even and the surfeit of pleasingly deceptive musical simplicity allows the irony of the central concept - that there is no such thing as reality anymore - an opportunity to filter through. It's also rather lively and convincing. With Earthling, its David Bowie's best album since Scary Monsters. 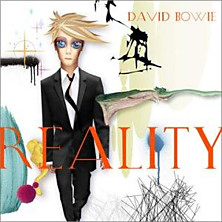