Thom Yorke and his merry men deal with global superstardom, the difficult way...

By 1998 Radiohead were at breaking point. Mentally and physically exhausted, Thom Yorke – forever the sickly Victorian child – had been pushed too far by fame and adulation. Like many before him, the thrill of playing to a stadium full of unquestioningly adoring fans had become soured by the sheer numbing quality of constant public scrutiny. In a way, Radiohead had, with OK Computer, peaked a little early.

Unlike Roger Waters’ similar plight with stadium-filling Pink Floyd, Thom didn’t get all messianic and self-pitying. He got angry and perverse: A much better solution.

The fact was that writer’s block had (understandably) descended. In the initial sessions with producer Nigel Godrich, Yorke arrived with half-finished lyrics and little else. A radical shift was needed. But instead of retreating into what the band knew best – era-defining indie rock - they took a leaf out of what was intriguing them at the time. And that was jazz, classical music and modern electronica in the guise of the Aphex Twin and his cohorts on Sheffield’s Warp label.

Suddenly, as Ed O’Brien’s now-famous blog of the recording process related, things started getting weird. Primarily a guitar and drums-driven band, suddenly they were producing songs with little of either. What’s more the whole shape of such ‘songs’ was being lost.

Instead the band began each song as an experiment on how to work in new ways. They sampled other artists ("Idioteque") themselves. They conducted a brass ensemble ("The National Anthem"). They tried to transmute their previous dread into art ("How To Disappear Completely"). This was rock finally growing out of its six-string straightjacket and embraciong cutting-edge advances in sound. Vaguely concerning itself with anti-commercialism and globalism in general, it left all listeners with a sense of the madness of modern life. Job well done!

And just as the band were about to unleash this monster on the world they nearly fell at the last hurdle; falling out badly over the running order. But more remarkable was the way in which Kid A was unveiled. Playing new songs live, they freely allowed fans to record and share their bootlegs on the web. After a couple of gigs the rabid masses who had nearly torn Radiohead apart were singing along to some of the most wilfully un-commercial music to reach #1 on the album charts. Having broken this barrier, the world really was their oyster. 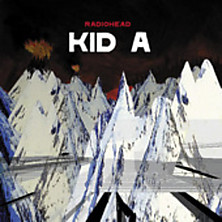