There’s something disturbing about 3 Hours, the opening track to Emika’s impressive eponymous debut album. Recalling The Crystals’ He Hit Me (It Felt Like a Kiss), its chorus advises whoever she’s addressing to "Hit me when you wanna and I’ll take the blame / Hit me and I guarantee you’ll feel the same / Hit me if you think that it will help the pain / Hit me, hit me, hit me, hit me anyway." Delivered in a deadened voice, its verse muttered and almost inaudible so that it’s hard to comprehend the context of this worrying but hopefully metaphorical instruction, it sets an unsettling tone, and it’s one that’s maintained throughout the dozen songs here.

Clearly a sound junkie – she cites Delia Derbyshire, the woman behind the Doctor Who theme tune, as a significant inspiration – Emika works at Berlin’s influential music software company Native Instruments, and it’s the sleek, sophisticated sonics that make her work so irresistible. Not all of it is due to technology – vocals for one song were apparently recorded in her bathroom "as the space colours my voice with no need for after effects". But this is, first and foremost, an electronic record, and it’s impossible to ignore the depth of the sub-bass that shudders beneath much of what she offers – something that would make James Blake jealous, especially on Professional Loving – or the claustrophobic intensity of Pretend, whose beat hammers grimly like machinery.

Though she’s strongly influenced by dubstep, a movement the Anglo-Czech musician watched develop while living in Bristol, Emika’s music doesn’t require an intimate knowledge of underground dance culture, owing as much to the atmospheric experiments of another of Bristol’s finest exports, Portishead. Like something off Third, The Long Goodbye has a torch song quality, but one suffocating amid disorientating, rootless metallic sounds, while Count Backwards has a stripped-back approach and yet an unusual density, such as one finds on Portishead’s debut. The Middle Eastern-tinged Common Exchange, meanwhile, gives M.I.A. a run for her money, and the closing Credit Theme, which sounds like it was written for the closing scenes of a black-and-white French romance, highlights her classical piano training.

Finally, though, it’s the sheer intensity of the whole package that seduces. Pop enough to be immediately accessible, but dark enough – in fact almost gothic, in the same way as Zola Jesus is gothic – to be mysterious and provocative, Emika leaves you wanting more, even though you know it’s sometimes rather troubling. 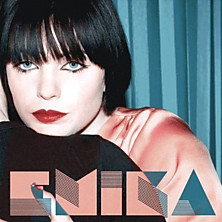