New Jersey quartet The Gaslight Anthem would be the first to admit that they share more than a home state with Bruce Springsteen. However, there’s nothing wrong with being heavily influenced by another artist so long as you still have something of your own to bring to the table, and on 2008’s superb breakthrough The ’59 Sound, The Gaslight Anthem did indeed bring something. While frontman Brian Fallon’s rugged but sensitive vocals and wordy blue-collar lyricism may have seemed familiar, the fact is that these guys were punks, something that Springsteen never, ever was. Sure, the music was anthemic, but the mix was rattling, rough, raw and thrilling.

Despite coming in shy of 35 minutes and retaining the services of ’59 Sound producer Ted Hutt, American Slang is an altogether cleaner-sounding affair than its predecessor. As such it’s not so much a bad record as a weirdly redundant one: four talented, passionate musicians do a perfectly reasonable job of making a record that sounds a good deal like vintage Springsteen, but fail to really leave their own mark on the music.

The opening title track is heroic, energetic and hopelessly derivative: “I got your name tattooed inside of my arm,” grunts Fallon, manfully, over a selection of backing hollers and coos that sound so similar to any given E Street Band affair that it makes you simultaneously want to punch the air and slap your forehead. It’s a nice song, but classic rock rather than punk and does nothing to transcend or build upon on its glaringly obvious influences. Where The ’59 Sound had a wired mania Springsteen never possessed, listening to American Slang feels a bit pointless when you could whack on Darkness on the Edge of Town instead.

It’s not total homage: the scrappy chant that ushers in the lithe Boxer is great fun, as is the swingin’ The Diamond Church Street Choir. The guitars do hit harder than Springsteen’s, and at the end of the day Fallon has a nice turn of phrase and a great way with a melody. Maybe if this was the first we’d heard of The Gaslight Anthem that would all be enough, but after The ’59 Sound, this feels like a regression. 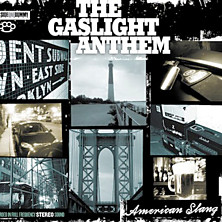