The blueprint for much of the leftfield music of the past 40 years.

Former Can vocalist Damo Suzuki is still a regular face in the gig venues of the world. His modus-operandi is to turn up in any given city and recruit a band of local musicians to provide the improvised backing to his shamanic, often-indecipherable exhortations. He’s therefore not changed much in the years since Can bassist Holgar Czukay discovered him busking outside a Munich cafe and asked him to join the group. Like Tago Mago, their third studio album and their second with Suzuki, these off-the-cuff performances still feel like something from a time not quite yet invented.

Now reissued with bonus live tracks in a beautiful cardboard fold-out sleeve (featuring notes by Duncan Fallowell, BBC reviewer David Stubbs and Primal Scream’s Bobby Gillespie), Tago Mago has lost none of its compelling strangeness over the four decades since it was recorded at the Medieval castle of Schloss Nörvenich, near Cologne. It’s an album imbued with atmosphere and sense of freedom that only such a birthplace could provide. The 18-minute Halleluhwah, for example, is a jam that feels neither hurried nor indulgent. Instead, the twangs of guitar give a spooked tension, strange sounds creaking like ancient doors or paintings coming alive in the candlelight as Suzuki mutters and moans.

This sense of place means that Tago Mago, originally released over four sides of vinyl, still feels coherent despite the rich banquet of ideas it offers up. You can hear, for instance, the seeds of post-punk in the pulse of Mushroom and Oh Yeah: the amphetamine rhythms of the latter inspired The Fall’s classic Can tribute, I am Damo Suzuki. Aumgn, meanwhile, lays down a prototype model for avant-metal. Again, its clatters, bangs and jangles sound like a waiter taking a plunge into the darkness of the Schloss cellar, teatime 1446. The lyrical gabble, hyper-speed percussion and shrill whine of Peking O happens upon Aphex Twin 25 years early.

To listen to the pioneering Tago Mago in 2011 is to hear the blueprint for much of the leftfield music of the past 40 years, and this reissue will hopefully inspire further invention for decades to come. 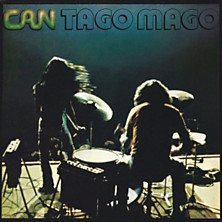