Polyphony and The Britten Sinfonia’s performance of Lukaszewski’s Via Crucis sometimes achieves such a frightening intensity that, if you were to play it in a darkened room, alone, it would almost be too emotionally overwhelming.

Pawel Lukaszewski was born in 1968 in the Polish town of Czestochowa, home to a Black Madonna icon. A childhood surrounded by pilgrims and religious imagery, the Second World War within living memory, and life under Communism all seem to have shaped his musical personality. Some of Via Crucis’s sense of apocalyptic tension seems to be hinting at more than just the Passion’s battle between good and evil.

The work is structured around the fifteen Stations of the Cross (fifteen rather than fourteen, because Catholicism has recent added a final station for the resurrection). Each Station is separated from the next and structured within itself by repetitions, and contrasts of texture, mood and tempo.

Polyphony portray all this variety in a dramatic tour de force, right from their opening Via Crucis, sung with fire-and-brimstone oomph, to the quiet supplication of the females’ Adoramus Te sections. Their sound is clearly defined, perfectly blended and balanced, and at times heart-rendingly expressive.

The Britten Sinfonia is the instrumental equivalent of the above, evoking menacing force and eerie calm with equal effectiveness. Roger Allam is a stirring narrator, and all three soloists – Iestyn Davies as countertenor, Alan Clayton as tenor, and Andrew Foster-Williams singing baritone – are dramatically and vocally outstanding.

Davies’ upper-registered description of Christ being brought down from the cross is particularly noteworthy for its sweetness and haunting beauty. As the music builds from quiet solemnity at the death of Christ, to the triumphant fortissimo climax of the resurrection, one can’t help but feel that this is a work due to receive a great many performances, and a recording to be used as a benchmark for the quality of them. 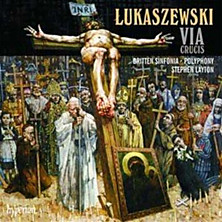