The Pierces You & I Review

Fourth album from Alabama sisters sounds like their commercial breakthrough.

There was a time when adroitly crafted, adult-oriented mid-tempo soft rock albums comprising bittersweet reflections on relationships turned sour pretty much defined the mainstream, notably on the back of Fleetwood Mac’s staggering late-70s success. You could argue that Adele has made the genre viable once more, but she comes from a rather different tradition. The Pierces are descendants of that polished Mac-style AOR, their lustrous harmonies and beautifully executed melodies sounding as though they were put together in the same LA studios that brought the world Rumours and the Bangles’ Different Light.

In fact, You & I was produced by Coldplay’s Guy Berryman, who has managed to make The Pierces seem as Californian as it’s possible for two sisters from Alabama who currently reside in hip NYC district Williamsburg to get. He’s also pulled off that difficult trick of making them sound classic yet timeless. Opener You’ll Be Mine harks back to an era you can’t quite pinpoint with its gorgeous hooks and mellow-tinged-with-sorrow air. It is the standout here but this is by no means a one-track affair. You & I is a consistent, strong collection featuring lush, full arrangements and one torrid three-minute melodrama after another (although in a recent interview Catherine Pierce declined to say how many of their songs are about her ex-fiance, Albert Hammond Jr of The Strokes). Glorious is an infectious jangle whose deeply unfashionable sentiment (“God bless the world, it’s so glorious”) rings with hippie ennui.

This is the sort of music an ex-member of The Go-Go’s might make after they grew up and became weary yet wise. Most of the time the girls sound like a stereo Stevie Nicks singing in a higher register, but on Kissing You Goodbye, which is so Bangles-cover-California-Dreamin’ it’s potentially litigious, there is a Susanna Hoffs-ian tremulousness to their voices. Space & Time is the husky, dusky, David Lynch-dark one. Drag You Down is the sultry one that proves these aren’t pop puppets, they’re girls with attitude. And I Put Your Records On is the one designed to up their cred with the alt-country brigade. Throughout, there are unexpected melodic twists and turns, and the whole thing feels like a bid for commercial acceptance, if indeed the market for this classy music even exists anymore. 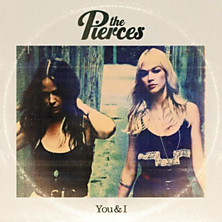