Prepare to be smitten all over again, as the NYC outfit release a brilliant fourth album.

Time isn’t kind to the cool. Disappear for too long, and nobody bats an eyelid when you return, fanfare conspicuous by its utter absence. Arriving over five years since their last LP, 2006’s First Impressions of Earth, white-hot-back-when NYC combo The Strokes could have so easily found themselves beside the likes of Razorlight and Toploader in the pile of re-emerging artists probably without a place in 2011. But they’ve avoided such a fate by putting together what might actually be their very best record yet.

Yes, you read that right: Angles isn’t just the equal of the band’s lightning-in-a-bottle debut of 2001, Is This It, it might be better. There are several moments here where the five-piece exhibit an infectious immediacy that’s presented in parallel with some genuine ingenuity, and the effect on the listener is to stop what they’re doing, focus fully on what’s unfolding, and then rewind to hear it over again. Take the strutting punk-funk bass of Two Kinds of Happiness – unremarkable in isolation, but soldered to sprightly percussion and real yearning in Julian Casablancas’ voice, as well as some frenetic six-string fret-work, it’s a vital constituent of a whole that’s fairly flabbergasting. If rendered graphically, one would have to picture early U2 and Talking Heads on a seesaw with The National acting as a fulcrum.

Taken for a Fool harks back in production tonality to the scratchy lo-fi charm of Is This It, but flexes significantly developed melodic muscles compared to a decade ago – this is a track, one amongst several, that will bury itself into one’s head for the long-term after even the most fleeting of encounters. It isn’t the only number here with a new-wave feel to it – and this move from 1970s garage revivalism to mining the cooler sounds of the 1980s for elements of inspiration pays serious dividends. Games opens like New Order in their prime, all glossy synths and solid bass, and closer Life is Simple in the Moonlight takes cool keyboards reminiscent of Scandinavian pop-experimentalists Mew and hits 88 miles per hour ‘til they’ve arrived back in 85. Casablancas doesn’t sound like a megastar at any point – he’s hungry, scrappy, like a newcomer ahead of the hype crest. For the first time since Is This It, he sounds a part of the gang rather than the stand-apart leader of it.

Truly, there’s so much to love about Angles that picking it apart seems as ridiculous as dissecting an expensive tray of chocolates, setting fillings aside from their delicious casings. They, like this record, taste far better with everything properly combined – and with all five members contributing, in harmony, The Strokes have here upped their own ante like nobody could have foreseen. Except for the band members themselves, of course. Prepare to be smitten anew. 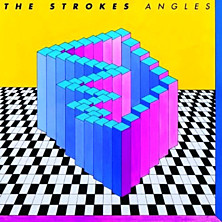