The pair exhibits a refined style on these illuminating performances.

Volume seven in baritone Matthias Goerne’s ongoing Schubert series bolsters his reputation as one of the top lieder singers of his generation.

Though often idiosyncratic, his readings are never less than thoughtful – and his original takes on well-known (and less well-known) songs frequently offer intelligent and bold new insights.

This latest volume, including some of Schubert's best-loved songs, presents the fruits of an evidently close collaboration with pianist Andreas Haefliger.

The gentle opening chords of the first song on the album, Im Abendrot (In the Evening Glow) are, in Haefliger's sensitive hands, at once arresting and becalming.

When Goerne enters, his rich, mellifluous tones are wonderfully subdued in a softly questing manner. Caressing the text with velvety half-voice, the effect is disarmingly beguiling.

There is an immediate sense of menace in Der Wanderer, evoked by Haefliger's understated, sinister introduction, and sincere desolation in Goerne's cries of “Where?” as the poet searches in vain for his lost love. The stoic resignation at the song's conclusion is reinforced by Goerne's sonorous lower register.

We travel through a further range of emotions and moods, including the intimately dreamy Nachtviolen and the flowing charm of To the Moon, before reaching the famous dramatic title song at the heart of the album, Erlkönig.

Goerne and Haefliger's account of this grim, sorrowful tale is not as collar-grabbingly visceral as some; they convey a sense of drama through more finely nuanced expression.

The beautiful By the Lake provides a welcome relief of tension, sung with effortless fluidity to silky accompaniment, as does an aptly bubbly and brisk version of Schubert's Trout.

Here Goerne is delightfully bright-eyed, and Haefliger glides over the keys with an almost impossibly gossamer lightness. The urgency of the third verse, as the fisherman finally catches his skittish prey, rounds off one of most effective performances of the album.

Some may wish for more heart-on-sleeve passion in the dramatic songs. Goerne and Haefliger rarely seem to break a sweat, an attitude that can sometimes come over as lack of effort.

But their refined style demonstrates its own supreme skill, and there is no shortage of illumination and pleasure to be had from in the songs on this well-filled and recorded album. 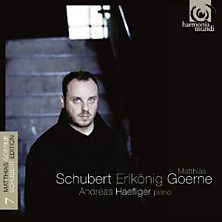