Demands to be heard by all lovers of Berlioz's best-known orchestral work.

One of the hottest new conducting talents around, British-born Robin Ticciati has been making waves with the Scottish Chamber Orchestra for several years, becoming its principal conductor in 2009. Berlioz has featured prominently in their concert programmes, so it is fitting that their first CD release together is of the maverick French Romantic's seminal orchestral work, the Symphonie Fantastique.

The sharp-focus clarity and litheness of this relatively small-scale account will come as a surprise to most listeners – we are used to grander versions with full modern symphony orchestras – but Ticciati's approach reaps great dividends. The portentous double bass pizzicato line in the atmospheric introduction has never sounded more unanimous, and the taut rhythm of the bouncing string chords beneath the gloriously legato woodwind melody ensures strong forward momentum.

There is a delightful lilt to the dreamy ballroom scene, the most carefree movement of the work, with liberal but discrete use of portamento sweetening the bold violin melody – and there is a genuine sense of danger in the brisk march to the scaffold. The detail and crisp delineation of textures that Ticciati achieves is nothing short of phenomenal, and the performance manages to regain much of the work's shock factor, lost in decades of over-familiarity and superimposed romantic gloss.

But, however impressive this fresh detail is, it is impossible to escape the nagging feeling that Ticciati too often concentrates on micromanaging at the expense of Berlioz's broader canvass. Many passages have little sense of line or direction, and the big tutti moments frequently lack the sheer power required to send thrilling shivers down the spine.

So, unfortunately, this new version is only a qualified success – but it is one that absolutely demands to be heard by all lovers of Berlioz's best-known orchestral work. The Linn engineers have worked wonders to make the most of Ticciati's forensic approach with superb clarity, while maintaining a warm, natural glow around the studio sound. 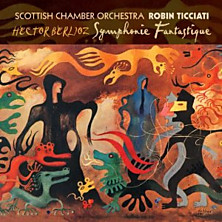