The late 00s saw everyone – clued-up, layman or otherwise – form an opinion on dubstep. A genre turned gimmick, many said, replicated by everyone from Britney Spears to what’s left of the Sugababes.

Such mainstream focus often heralds the winding-down of a genre, but Modestep are ready to test that theory. The London quartet is stood with fists clenched, brandishing a brave new approach that not only breathes life into the concept, but carries an element of auteurship: a Modestep song always and only sounds like a Modestep song.

The live facet that Modestep pride themselves on isn’t consigned to just the stage itself. From the outset, instrumentation and performance plays a crucial role in debut album Evolution Theory.

Dubstep doesn’t even feel like the foundation of their sound – it’s almost a by-product of such intensive experimentation. Somehow, if an element of every genre is thrown into the mix, its presence is an inevitability.

For those looking for it, the fundamental chestnuts of the genre are present. But the discordant, hiccupping squelch thankfully isn’t left to its own devices too often – for the most part, it plays bed to a selection of gritty riffs, engrossing vocal melodies, or quirky synth runs.

And it’s a pretty effective mix. The emergent, adventurous Another Day proves the point nicely. The title track begins as a sparse, piano-led pseudo-ballad, before swelling into atmospheric RnB, overtaken by a metal crunch and ending life as a rapid, industrial thumper.

Such tracks are testament to Modestep’s unique give-away-the-farm approach – why stick with one idea when 11 will do? But even within that, there’s a remarkable restraint. They allow tracks to gather momentum organically, each song carving out a journey all of its own.

The broad, stuttering beats do fatigue the listening experience eventually, but music this animated and unrelenting demands a very specific ear in a very specific setting. And the vivacious musicality of Evolution Theory points towards that setting being the live arena.

The stage is where Modestep come to life, and Evolution Theory sets them up to do that with some considerable aptitude. 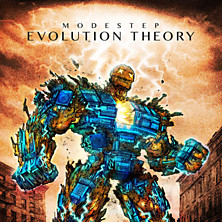