It remains, primarily, some of the best stuff that Albarn's ever done.

History is littered with virtual bands. The 60s had The Archies and The Banana Splits, the 70s had The Wombles and everything created by Jonathan King. But by the 21st century the concept was to become far more than a way of marketing pop to kids. Gorillaz is most decidedly a grown-ups' affair. At the point where Blur - bereft of guitarist Graham Coxon - decided to take a break and Damon Albarn was still grieving both band and a long-term relationship, instead of wallowing in a Lennon-esque 'lost weeekend' he took a creative left turn. Sharing a flat with friend and Tank Girl cartoonist, Jamie Hewlett, the pair decided to create their own bunch of reprobate, porno-loving oiks. Mis-Spelling the name with a 'z' in honour of the ultimate cartoon band, The Monkees, Albarn and Hewlett joined forces with San Francisco's hip hop genius, Dan 'The Automator' Nakamura and the band was born. Hewlett created the visual identities of 2D, Murdoc, Noodle and Russel while Albarn added the soundtrack to their cartoon capers.

While Hewlett's graphics are amazing (the band's website was a paragon of all the stuff we now take for granted in terms of marketing a concept album), the album belongs to Albarn. His vocals litter all but two tracks and the palette reflects his divergent interests in everything from lo fi garage (5/4, Punk) to wonky hip hop (Rock The House), dub (Sound Check (Gravity)) early electronica (Double and Man Research: a tribute to Raymond Scott's Manhattan Research Inc.) and even krautrock (Starshine, M1 A1). Nakamura's touch lends the album a spooky bottom end and a host of stars willing to subsume their identities under the band's two dimensional front (Talking Heads' Tina Weymouth, Morcheeba's Skye Edwards, Del Tha Funkee Homosapien and even Ibrahim Ferrer) mean that, while the diversity is a little dizzying, any sidestepping is always in safe hands. Plus Albarn's innate way with a tune meant that the tracks could handle any amount of mandatory remixing. The two-step version of Clint Eastwood still stands as a classic get-out-of-jail-free moment for any DJ stuck for a floor filler.

Regarded at the time as a successful if slightly self-indulgent hobby/holiday for Damon and his stoner mates, in hindsight Gorillaz holds up amazingly well: Better, in fact, than the subsequent Demon Days, where the higher celebrity count detracted from the album's coherence. It remains, primarily, some of the best stuff that Albarn's ever done. 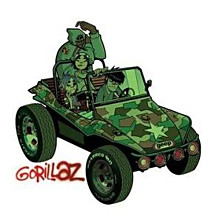