In Ghost Colours rewards you with fresh magic with each listen, and sounds even better...

Four years is a long time in these accelerated days. Since Cut Copy last released an album, we’ve witnessed entire careers crash and burn. However, patience is rewarded for those who first fell for the Melbourne-based trio when they supported Franz Ferdinand or Bloc Party, or indeed were lucky enough to witness them beneath Daft Punk on the Australian leg of those picky robots’ world tour. The word of mouth helped turn their debut, Bright Like Neon Love, with attended singles such as Going Nowhere, into a slow-burning smash. Already in their native Australia, In Ghost Colours has entered the charts at number one. Although their stock may not be as high here, there’s no reason why it shouldn’t be purchased in droves and Cut Copy adopted as our own.

Recorded over a six week stint in New York with DFA mastermind and in-house producer Tim Goldsworthy, In Ghost Colours is a fantastic collage of an album. One minute it’s like ELO on E (opener Feel The Love), the next it’s as if Kevin Shields has joined Technique-era New Order (Unforgettable Season) or Interpol have finally conceded to their inner disco (Midnight Runner). Those of you who visit the blogosphere will be well aware of the superb rave-up of Hearts On Fire; full of laser-guided moments and euphoric breakdowns.

This is undoubtedly Cut Copy’s pop album, as the pace rarely drops beneath boogie, and with much of it mixed into each other, it gives off the vibe of a perfect album to speed through the city at night to or an ideal dance album for those a bit too old to throw shapes in public, but occasionally bust moves around the kitchen. Indeed with its melange of ideas and references coming at you in each tune, it’s exhausting to pick out everything, but this is by no means a bad thing. In Ghost Colours rewards you with fresh magic with each listen, and sounds even better when the bloody rain stops. 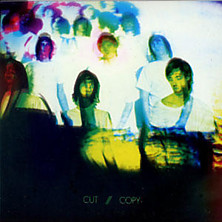