Despite its retro-experimental aura, this album still possesses the tension and...

Trumpeter Bill Dixon was a significant presence on the free improvising jazz scene of early-1960s New York, but his performing progress suffered from a predilection for academic activities, and his recorded output has consequently remained sporadic. So, ultimately, Dixon's legendary reputation might be bigger than his documented reality, although he was chosen for the Lifetime Recognition award at 2007's Vision festival in New York. Chicago Underground cornetist Rob Mazurek had long admired Dixon, meeting him for the first time whilst attending the trumpeter's workshop at the Guelph Jazzfest in Canada. Soon, this was to lead towards a mutual appreciation, as the elder caught the younger at one of his São Paulo Underground performances (Mazurek had moved to Brazil from the US).

The Exploding Star Orchestra, assembled in 2005, feels like the culmination of Mazurek's various Chicago Underground manifestations. It's the biggest so far, bustling with at least 12 members. Some of these, you will know from the Windy City scene: trombonist Jeb Bishop and guitarist Jeff Parker, for instance. The Orchestra creates sounds akin to its name, or at the very least, the rumblings of a deeply troubled earth's weather system. Dixon's two-part Entrances bookends the disc, dedicated to solar storm-brewing, utilising a palette of shimmering vibraphone, dappled piano, murmuring timpani drums and deeply slumbering bass. The co-leaders trade echoed horn spirals, and the Orchestra plays as one cerebellum, shunting from complete spacious abstraction to unstoppably rolling themes. Mazurek's lengthy Constellations For Innerlight Projections is even more impressive, complete with a retro cosmic proclamation by Damon Locks that evokes the 1960s and '70s vibrating spheres of Sun Ra, and with an instrumental gait that suggests Moondog on the move; tubular bells chiming resoundingly.

It sounds as though Dixon is the rogue interferer, whilst Mazurek pinpoints with a more composerly precision, one replete with heavy echo, the other tightly splintering. Despite its retro-experimental aura, this album still possesses the tension and tightness of 'now'. 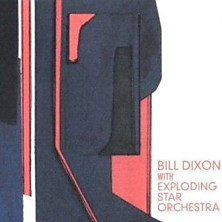