The man who, in the 70s, used to present one of the most disturbing live shows ever...

Maybe it's the curse of the Welsh. To this reviewer the continued canonisation of Cale's old mucker from the Velvets -Lou Reed -seems totally at odds with his artistic achievements. Old carpet head is continually lauded as the original bad boy rock 'n' roll messiah, despite the essentially simplistic, reactionary nature of his four-four guitar work-outs. He pales next to Cale's varied, restless and questing career. Just compare either man's latest releases. Reed hawks his back catalogue or gives us double albums of literary floundering: the chiselled avant gardist from the valleys give us just five tracks. But this handful is infinitely more compelling and vital than several discs of questionable Edgar Allen Poe adaptations.

A precursor to a new album in the autumn; 5 Tracks finds Cale at last back on a major label and, as is fitting for a man who's worked with everyone from LaMonte Young to Super Furry Animals, working in a whole new way. Dispensing with a studio band and constructing songs from samples has freed JC's muse in a way that hasn't been heard since his late 70s/early 80s albums. In recent interviews he's alluded to his respect for the Beta Band and their looser loop-based methodology.

This much is obvious in the opening song ''Verses'', yet it's by no means a soundalike. Cale brings his own particular brand of bleak lyricism to these grooves and, whereas the Betas would lapse into pastoralism over breakbeats, John gives us subterranean screams. Even at 60 he's never forgotten his agenda to unsettle at every turn.

''Waiting for Blonde'' continues the vein but brings us Cale's take on 9/11 and the apocryphal tale of a New York subway conductor's attempts to raise morale. Its wry detachment is, by turns, chilling and blackly amusing. ''E Is Missing'' gives us Cale's one-man campaign to reinstate Ezra Pound into the literary hierarchy. And ''Wilderness Approaching'' (taken from his soundtrack toRamin Naimi's film Paris) shows that underlying all of this gritty determination to embrace our darker side lies a consummate instinct for melody.

This is no leather-clad posturing. The man who, in the 70s, used to present one of the most disturbing live shows ever staged in the name of 'rock' (poultry lovers still avoid his shows to this day), is still as dangerous, challenging and uncompromising as ever. Listen and learn... 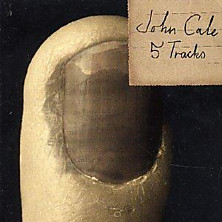