Klaxons Myths Of The Near Future Review

...The rabid back-beat marries punk with rave and throws you around in a glorious...

Stratford-upon-Avon and Bournemouth...they’re not the most inspiring places in the world, are they? One’s choke full of Americans searching for some culture, while the other should have bi-focal windows. Yet, they’ve somehow come together to produce one of the most exciting bands of 2007.

It’s easy to see Klaxons as a simple British response to The Rapture, given their propensity for big beats and cyclical melodies, but Myths Of The Near Future shows they are much, much more.

It’s the type of album that burns into your consciousness, as equally joyous and intelligent in its oddness as it is in its downright danceable funkiness.

Take "Totem On The Timeline" for example. If the line 'At Club 18-30 I met Julius Caesar, Lady Diana and Mother Theresa' wasn’t enough to put you in a spin, the rabid back-beat marries punk with rave and throws you around in a glorious grinning mess.

Klaxons are special, though, because they know they have to have more than that one level. They may have made their name with storming full-on belters, but they’ve got the subtlety to bring things down a peg and become almost introspective on the likes of "As Above, So Below" and the wonderful opener, "Two Receivers".

That said, if this is naval-gazing, then it turns out that the entire galaxy is spinning away in there.

Who’d have thought that such a pair of towns could have produced Klaxons? Maybe it’s best not to try and fathom it. Just lie back and enjoy the mystery of it all. These may well be Myths Of The Near Future, but they’re more like music to throw shapes by. 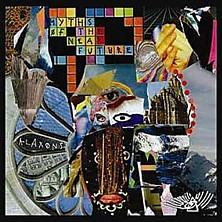