Guaranteed worldwide coverage because of his day job as Radiohead’s drummer and signed to Bella Union, a UK indie label currently at the top of its game, Phil Selway is in an enviable position. It’s hard not to wonder what his fate might be were he not part of one of the world’s most successful rock bands, however. Singer-songwriters serving up softly spoken whimsy aren’t exactly in short supply, after all, and Familial certainly breaks few boundaries. In fact, even the most fervent of Radiohead fans might lack the patience to get excited about this humble collection. But therein lies its charm.

Distancing himself from the oblique lyrical tendencies favoured by Thom Yorke as much as Radiohead’s complex approach to alternative, occasionally experimental rock, Selway here restricts himself mainly to acoustic guitars, barely perceptible rhythm tracks and whispered sincerity. Indeed, the most striking aspect of its production is his modesty: rather than gathering together famous friends he turned to Lisa Germano, an artist whose profile has dwindled so far since her 1994 4AD debut that she barely qualifies for cult status, and Wilco’s Glenn Kotche and Pat Sansone. Instead of Nigel Godrich’s expansive studio techniques he hired engineer Ian Davenport and recorded in his management company’s studios, and forsaking oblique angst at the world’s injustices, he writes as a man in his mid-40s about, as the title suggests, domestic matters, inspired by the 2006 death of his mother.

Consequently Familial initially seems timid, even half-hearted, but persistence reveals an album full of sweet sentiment and honest meditations. Opener By Some Miracle dwells in hushed tones on the familiar artistic problem of depression, The Ties That Bind Us is full of references to “the family man” and his desire to “shield” his son “from my mistakes”, and Broken Promises addresses the loss of his mother in universal, touching terms. Whether this understated, almost folksy collection is easily distinguished from the endless stream of sensitive types pouring out their hearts onto tape, however, is hard to say. But Don’t Look Down, with its subtle background drone, is soothing as chamomile tea, and A Simple Life boasts a startling, haunting brass arrangement. If Selway’s fame can help encourage people to explore the more refined subtleties of music like this he’s served himself and his fellow songwriters well. 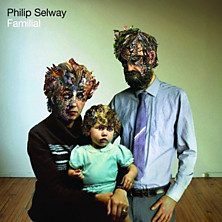