...Dylan is utterly at ease with himself here.

The world is divided into those who think double albums are a really only single albums weighed down by too much filler and the over-indulgence of their creators, and those who treasure every minute, revering the range afforded by the extra space the format provides. As someone who has yet to hear a double album that couldn’t be trimmed to single figures, I confess a bias when it comes to Blonde On Blonde. Regularly spied in orbit around heavenly bodies such as Pet Sounds, Revolver in those stellar “best album ever” lists, side one is a golden run of songs that are about as perfect as you could want.

Even a cursory glance at the highlights would be enough to confirm this first disc’s classic status: the rambunctious stomp of “Rainy Day Women #12 & 35”, the shrill punctuation of Dylan’s harp on the surly rant of “Pledging My Time”, a riotous neck-wrung blues soloing on “Leopard Skin Pill-Box Hat”, opulent, elegiac verses on “Visions Of Johanna”, the popish affectations and beautiful detail of “I Want You” and “Just Like A Woman.”

Consolidating what he’d begun on Bringing It All Back Home and Highway 61 Revisited, the recording of Blonde On Blonde was part of an intense, fertile outpouring for Dylan. One can understand why Dylan and producer Bob Johnston were keen to present as much of it as they could. As a result however, the taut energy of the first disc become somewhat elasticised across the second, “Sad Eyed Lady Of The Lowlands”, whose eleven minute length even caught the backing musicians by surprise, being the chief culprit. Of course one person’s prolix poetry is another’s visionary epic.

One point which both sceptics and believers can all agree on however is the extent to which Dylan is utterly at ease with himself here. Credit also, should go to the crew backing him up. And if their backing is at times a little hurried or patchy, the improvisatory nature of their trying to keep up with the man at the microphone is also a part of this album’s overall charm. 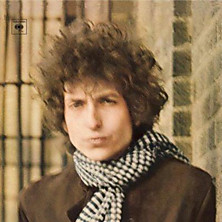