An eternal reminder of the other side of idealism's coin.

Nowadays lauded as one of the most perfect (and influential – can you think of any Northern post-punk bands that haven't name-checked it?) albums of all-time, Forever Changes was, on its release, a flop.

The reason for this lies in the fact that, despite being undoubtedly a psychedelic folk album, it's one of the oddest, most sinister products of the mid-60s West Coast that you’re ever likely to hear.

The band, formed around the twin talents of Hollywood brat Bryan MacLean and folk beat rebel Arthur Lee, were seen as moody outsiders to the LA peace'n'love community, known for their insularity and rather edgy image. By 1967, after two albums, the band was holed up in Bela Lugosi’s mansion in the grip of acid-fried egotism and early heroin addiction.

Always drawn to outsiders, it was Neil Young who originally agreed to produce, but dropped out at the last minute, leaving it to Elektra’s house producer, Bruce Botnick (aided by Lee).

Dismayed by the band's sorry state, Botnik drafted in session players like Hal Blaine and Carol Kaye. Luckily this had the correct galvanising effect, and the band pulled themselves together just enough to complete the sessions.

The result was the aforementioned weird mix of gossamer psych folk and itchy LSD musing. MacLean's Alone Again Or with its Southern Californian mariachi frills is a disarmingly pretty opener. But Lee’s lyrics are exactly on the cusp between blessed out surreality and bad trip paranoia.

Live and Let Live has one of the strangest opening lines of all time: "Oh, the snot has caked against my pants / It has turned into crystal…'' But within one line the protagonist is wielding a gun to repel all trespassers.

Meanwhile, on A House Is Not a Motel, after sarcastically singing that, "the streets are paved with gold", he says: "The water's turned to blood, and if you don't think so go turn on your tub and it's mixed with mud."

Such reminders of the beast lurking beneath the hippy dream were probably too blunt for an audience desperate to escape the reality of Vietnam and civil unrest. And that's why it took years for first the cognoscenti and now, seemingly, the rest of the world to catch up with this startling album.

It didn't avert the demons banging at the door of Love's mansion, but Forever Changes serves as an eternal reminder of the other side of idealism's coin. 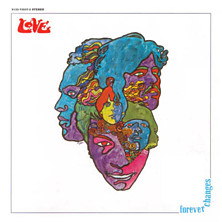