Despite the experimentation and haunting guitar solos this is essentially a pop...

The band can be found in the same ball park as The Flaming Lips - they clearly share a love of reverb, theremins and wowee zoowee sounds. But this record is more accessible than previous releases; there's even a chorus to be found in some of the tracks here. This might be explained by the fact that the record is co-produced by John Leckie (of Stone Roses and Radiohead fame).

Singer songwriter Jim James is obviously crucial to the band's sound. The fragile intensity of his soulful vocals dominate on tracks like "Lay Low" and "Dondante".

Stand out track "Off The Record" begins with a reggae pop fusion that's reminiscent of The Clash before merging into a mellotron fuelled prog session that would make Pink Floyd fume with envy.

Despite the experimentation and haunting guitar solos this is essentially a pop record, but one that will definitely keep your attention. 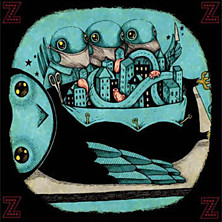