Following on from their 2003 Remixed compilation Jazzanova this time pool together...

Last year we raved about the Berlin-based production unit's Jazzanova Remixed - a collection that drew together for the first time every remix that the sextet had had commissioned of their work since their inception in the mid-'90s. Twelve months on and Jazzanova... Mixing adds a twist to the theme by compiling a selection of remixes the collective have undertaken for others, along with a handful of new and alternative mixes of their own recordings.

Opening with the Philly swagger and languid beat matching on "A Long Walk" by neo-soul high priestess Jill Scott, the globally enriched project and tempos swing at first to the deep and jazzy, and then to the downright abstract as London's Attica Blues benefit from post-production chores on the eclectically melodic "The Quest".

Frantic jazz broken-beats form the backdrop for Phoojun's indefinably leftfield "Rainbow", that sits comfortably alongside the sophisticated house/jazz chords of Ãme's remix of the group's own "Glow And Glare"; and then juxtapose to the disco panache of '80s New York nightclub sensation, Carol Williams, on her midtempo boogie offering "Can't Get Away (From Your Love)".

Elsewhere when the tempos do drop the results are even more noteworthy; Bahamadia's poetry is truly in motion over a groove embellished with the traits of A Tribe Called Quest on the bumpin' "Uknowhowwedo".

Self-indulgence in fact makes up for almost a third of the 16-tracks that include solo offerings from group members George Levin and Deyampert, along with an equally beautiful reading of Patrice Rushen's "Let Your Heart Be Free" under their Jazzanova moniker.

Jazzanova's sustained success has been their vision for using the traditions of the roots of jazz to make the music more accessible; sharp musicianship and sophisticated production flair that pleases the mature listener whilst all the while maintaining contemporary aspects for both stalwarts and new fans alike. And by refusing to adhere to any one musical style, Jazzanova has become one of the most durable artists in their field. 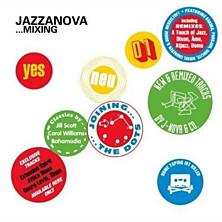