Death by chocolate sounds more like the kind of demise to be found within the pages of a Roald Dahl tale than the stuff of real life. However, if we're to believe the legend, that's exactly how the celebrated Neapolitan composer Leonardo Vinci met his end in 1730.

The story goes that the composer let slip that he had enjoyed intimate relations with a noblewoman, and thus provoked one of her relatives into poisoning his cup of chocolate by means of revenge. Accurate or not, it's certainly a larger-than-life cause of death, and this recording of his final opera is almost as attention-grabbing.

Not so much for the fact that it's a world premiere (frankly, it's hard to get excited about world premieres when the classical market now groans under the weight of them), but for its all-male cast made up of five counter-tenors and one tenor – a necessity thanks to a papal decree of the time which banned women from appearing on the stages of Rome's theatres. This recording features the brilliant countertenors Philippe Jaroussky and Max Emanuel Cenčić.

Vinci's chief gift to the early 18th century operatic world was accompaniments that supported and showcased the vocal lines, rather than the norm of distractingly dense harmonic and instrumental structures. Admittedly, for us with our 21st century ears, it's hard to hear this with the fresh delight that his original audiences must have done.

Still, it's less hard to hear why Arteserse is considered to be Vinci's masterpiece. Composed for the Roman carnival of 1730 to a libretto by Metastasio, Vinci's intention was that it would dazzle. Vigorously rhythmic and highly dramatic, the opera has extraordinary energy, and some beautiful moments. This recording brings this all out, partly through the cracking tempi set by Diego Fasolis, partly through Concerto Köln's effervescent, historically informed performance, and partly through the sheer energy of the cast. 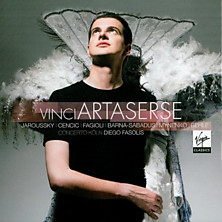