You can almost see his fingers sliding over the strings as he teases exquisite,...

Debashish Bhattacharya is India's leading inventor and exponent of slide guitars. Based in the West Bengal city of Kolkata, where he runs his own 'School of Universal Music', Bhattacharya got the slide guitar bug as a three-year-old, when he started experimenting with a Hawaiian lap steel guitar. Recent albums have showcased a 'trinity of guitars' – his favourites of the many he has invented? The 22-stringed Chaturangi, the 14-stinged Ghandarvi and the tiny ukulele-like Anandi, which has only 4 strings. Each produces a wide array of timbres, which he uses to suggest various Indian instruments.

Calcutta Chronicles: Indian Slide Guitar Legacy is his first new material since winning a BBC Radio 3 Award for World Music in 2007. The pieces here are shorter than those on his previous album, Calcutta Slide-Guitar, Vol 3 (2005), though still based on traditional ragas. Indeed, the lovely morning raga Amrit Anand fades out after just three minutes, leaving you craving more. For more upbeat pieces such as Nivedan and the thrilling crescendo of Aviskaar, he's joined by his brother Subhasis on tabla.

Just as Bollywood playback singers mix up Indian folk and pop with whatever foreign flavours their producers fancy, Bhattacharya's music is an outward-looking take on tradition. That's obvious from the fusion feel of the opening Sufi Bhakti, which uses three different Anandi guitars and flourishes of Indian harp to great effect. Gypsy Anandi is a lightly skipping, festive piece incorporating Hawaiian and Afro-Andalucian flavours, which suggests the influence of American guitarist Bob Brozman, who recorded the album Mahima with Bhattacharya in 2003.

Favourites are the calm, still pieces such as Ganga Kinare, Rasika and the wonderfully twangy Kolkata to Kanyakumari. These are the best showcases for Bhattacharya's extraordinary note-bending artistry, set against a droning heat haze of tamboura sound. You can almost see his fingers sliding over the strings as he teases exquisite, metallic tendrils of sound from them. And although it's debatable how many Bhattacharya albums you need, this is as good a place to start as any. 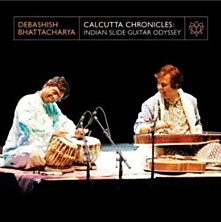