There’s a story that on a visit to Leipzig in 1789, Mozart found himself listening to the choir of Bach’s old church rehearsing one of his motets. After just a few bars, Mozart cried out in wonder, and at the end, he gathered the vocal parts around him to better absorb the miraculous music that had so delighted him.

Even in these days of Bachian plenty, there can be times when you feel that Mozartean delight and awe bubbling through your blood vessels. This new recording of Bach motets from Peter Kooij’s ensemble Sette Voci has that tingle factor.

There’s nothing obviously remarkable about it, but remember Kooij’s deep immersion in Bach, since his days as a treble in his father’s choir, through to his role as preferred bass soloist for Masaaki Suzuki’s cycle of Bach Cantatas. And if you look at Suzuki’s own recently released recording of the motets, you’ll find that Kooij’s ensemble shares three singers. But the sound is so different: Suzuki’s Bach Collegium Japan has 18 singers, continuo, and discreet instrumental doubling from choirs of strings and wind; while for Kooij everything’s done with just eight voices, organ and violone.

Given the skills and precision of his ensemble, this brings an unforced immediacy and intensity that lifts the texts from the page. The singing is clean and unfussy with little or no vibrato, and the opening chords of Komm, Jesu, komm are delivered with uncanny unanimity, impeccably tuned and balanced from top to bottom. Jesu, meine Freude has a simple austerity and aching inevitability that sits perfectly with its origins as a funeral motet; Suzuki may offer more sensual variety and drama, but the result is more diffuse, and the tighter focus of the Ramée recording only adds to the immersive intimacy.

You also get seven motets: Ich lasse dich nicht returns to the fold, with scholars agreeing that it’s more likely to be early JSB than his uncle Johann Christoph, a disciplined contrapuntal elaboration of a classic funeral text. All-in-all, this is a disc of serious beauty, from the cover photo of the vaulting of St Thomas’s church in Leipzig, to the sublime vocal tracery within. 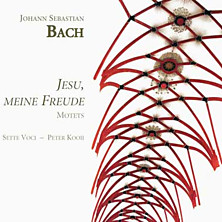