The Pretenders The Best Of/Break Up The Concrete Review

To hear them again is akin to very good friends returning from afar.

Playing with a new Pretenders (on album at least), Chrissie Hynde is in fiery, fiery form on this, the group’s ninth album. Released in the US late last year, it marked their return to the Top 40 for the first time in over 20 years. And it is easy to hear why. In many respects, it's as good as their first two albums.

With regular Pretenders James Walbourne on guitar and Nick Wilkinson on bass, Hynde is here augmented by Eric Heywood on pedal steel, and, replacing long serving Martin Chambers for this album only, drum legend Jim Keltner. Session drummer Keltner, who’s played with everyone from John Lennon to Steely Dan, adds bite to the record with flawless, earthy playing.

There is no respite here. We are for a 36-minute old-fashioned ride. Classic rockabilly and with touches of Tex-Mex abound, and the Bo Diddley beat is dusted down and showcased.

But this is no hoary self-tribute. Hynde’s forever acerbic, poignant and witty lyrics, combined with her unique voice make this sound positively modern. Almost Perfect, with killer lines “a lady who has two black eyes is not the best one to advise, she’s already been told twice” and “employed, illegal, you’re a whole film by Don Siegal” is a fine example of this.

The no-nonsense rockabilly of opener Boots Of Chinese Plastic, has all the rush of the late 70s power pop coursing through it, with a great chorus (“By the way you look fantastic/in your boots of Chinese plastic”). It is 2:31 of top quality stupidity that sets the tone for the next 10 tracks. The touching You Didn’t Have To evokes Kid; Don’t Lose Faith In Me, has a soulful, gospel influence.

Taking few chances, Breaking Up The Concrete has been coupled with a 22-track Best Of, making it even more desirable. Shimmering pop like Brass In Pocket or I’ll Stand By You need little introduction, but to hear them again is akin to very good friends returning from afar. 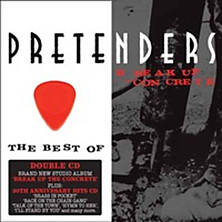