The Jesus and Mary Chain Upside Down – The Best Of Review

To declare, as this CD’s artwork does, that East Kilbride’s The Jesus and Mary Chain are "arguably the last great British rock’n’roll band" is almost as provocative as the music with which they kicked off their career. Early releases may have been deeply influential for plenty of artists that followed – like Black Rebel Motorcycle Club, The Horrors and shoegazers galore – but whether such a superlative is justified remains questionable.

The Reid brothers’ 1985 debut Pyschocandy, represented here by the deliciously fuzzed-up Just Like Honey and the trebly squall of tracks like Never Understand, still remains one of the most exciting records of the last quarter-century, its alternating mess of screaming feedback and narcotic acoustics shaped by a love of Phil Spector’s production techniques, 1960s pop and biker mythology. 1987’s Darklands – which saw Bobby Gillespie leave to focus on Primal Scream, his single drum replaced by a machine – found the brothers’ fierce rage ousted in favour of a shadowy languor accessible enough for April Skies to chart, though the latter’s similarity with follow-up single Happy When It Rains hinted at limited horizons. But with 1989’s Automatic they already seemed to be a pastiche of themselves, the thunder of the previous year’s stopgap single Sidewalking often neutered by heavy-handed, programmed drums.

Automatic’s considerably slicker production, however, endeared them to the US, and by 1994’s Stoned & Dethroned they seemed to have entirely lightened up, its highlights – the dreamy Sometimes Always and the languid God Help Me – tellingly featuring guest vocalists, respectively Mazzy Star’s Hope Sandoval and The Pogues’ Shane McGowan. But 1998’s Munki saw them re-embittered, I Hate Rock’n’Roll’s nihilist roar and Jim Reid’s lazily drawled Cracking Up amongst the best moments of their career. Sadly the public had moved onto the laddish, self-indulgent pleasures of Britpop, and few noticed when the brothers separated amidst the kind of fraternal acrimony that had ironically become part of Oasis’ appeal.

Ten years later, however, they returned with triumphant shows at California’s Coachella Festival and London’s Royal Festival Hall, and this retrospective – complete with non-album singles like the unforgettable Some Candy Talking – offers plenty of good reasons. In its generous 44 tracks, however, it also reveals a band with a surprisingly conformist agenda, the simplicity of their songs as often one dimensional as powerfully immediate, their later tightness at odds with their chaotic genesis, their reliance on trad’ rock’n’roll Americanisms overshadowing more exciting (if admittedly crude) lines like "I want to die just like Jesus Christ". Upside Down therefore ends up highlighting that, despite their current sacred cow status, The Jesus and Mary Chain were merely an occasionally great British rock’n’roll band rather than the last. 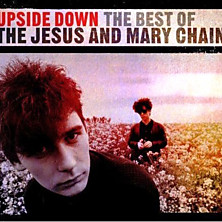