This truly feels like the 'Dido' for the 21st century.

Forgive me a sweeping generalisation, but its fair to say that great British operas, pre-Britten, can be counted on one hand. Half a hand, even. However, what we lack in quantity, we make up for in quality, as illustrated by Henry Purcell's Dido and Aeneas. This new recording for Chandos from the Choir and Orchestra of the Age of Enlightenment is surely set for widespread critical acclaim.

The performance takes into account new developments in scholarly thinking, aiming to emulate more closely the court entertainment of Purcell's day. Most noticeable is the incorporation of other dance works by Purcell: a tune from Bonduca, the Almand from his G minor keyboard suite and, my personal favourite, two improvised guitar dances played by the OAE's plucked-continuo players. These inclusions do give the opera a different, more courtly feel to previous recordings; they open it out, allowing more contemplation on the unfolding action. The orchestra, directed by Steven Devine and Elizabeth Kenny, plays with rather more reserve than in Christopher Hogwood's Academy of Ancient Music recording, but this turns out to be no bad thing. In fact, it strangely enhances the dramatic punch.

Sarah Connolly as Dido is magnificent; from her opening ''Ah, Belinda'', she presents a queen emotionally removed from her surroundings, a subdued loner, predicting disaster even amidst present happiness. Her lament, the crowning climax of a weighty performance, is as vocally beautiful as her acting has been insightful. Lucy Crowe as Belinda, bright and pure of tone, is the perfect foil to Connolly's Dido, whilst Patricia Bardon’s Sorceress oozes stage presence. Carys Lane and Rebecca Outram as the witches are a more sophisticated 21st century pair than the traditional hags hopping around a fire: think Bewitched rather than Macbeth. I prefer the latter, but it's a matter of personal taste. Then, Gerald Finley as Aeneas is in fine voice, capturing to a T the hapless lover torn between war and his queen.

This truly feels like the 'Dido' for the 21st century. 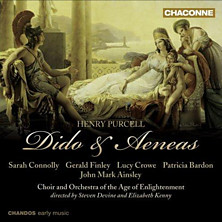