Has an important story to tell, while being an enjoyably sun-soaked listen to boot.

The link between Jamaican and Afro-Latin styles is well known to musicologists, but rarely has their friendship been made as explicit as by Will “Quantic” Holland’s side project, Flowering Inferno. Second album Dog With a Rope is a studiously retro blend including rocksteady and reggae, Colombian cumbia and Cuban rumba, striking a balance vintage revivalists of all stripes can enjoy.

The heartbeat of reggae is the drum, and Quantic has wisely installed the sole reggae artist, UB40 and Steel Pulse sticksman Conrad Kelly, in the driving seat behind the traps. He’s joined by Peruvian pianist Afredo Linares, Colombian percussionist Wilson Viveros and an ensemble of horn players from Cuba, Colombia and Panama.

As the disc space-snubbing LP length of this set should indicate, Holland has gone out of his way to make it sound like it was recorded some time before 1974: playing up the warmth, the crisp horns and Fernando Silva and Jorge Herrera’s booming upright bass.

Some subtly spiced covers of heavily versioned classics make the most immediate impact. Where debut album Death of the Revolution recut Niney the Observer and Soul Syndicate’s Al Green-inspired Westbound Train, here the Soul Vendors’ Swing Easy is revisited by Cuban Angel Hernandez’s soft trumpet and Holland’s accordion (taking the role given to the melodica in dub).

On the surface, Dog With a Rope may strike the forward-minded as another pointlessly nostalgic exercise, playing to a retro-soul and world music market where respectability comes only with age. But in fusing together these traditional forms Quantic has created something new. And, with some reggae fans unaware of the Latin influences on the biggest rhythms, this disc has an important story to tell, while being an enjoyably sun-soaked listen to boot. 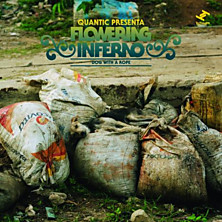