The Smiths Meat Is Murder Review

...there was no other British group making music quite like this in 1985.

After their flawed but retrospectively admired debut album and the frankly adored stop-gap round-up of radio sessions and B-sides A Hatful Of Hollow, the Smiths' second album, Meat Is Murder, is often unloved in their canon for its occasionally overwrought and arguably contrived nature. It marked the third long-player from the group in the space of the year, such was their creative thrust at the point when they were seen as the most important British band since Joy Division.

Although the following year's The Queen Is Dead will forever be their ultimate statement, the best parts of Meat Is Murder are the best parts of the Smiths themselves with Johnny Marr vigorously playing with his stylistic toolbox. One of the greatest accusations levelled at the Smiths in the day was that everything sounded similar. Hearing Marr's magpie-ism today that couldn't be further from the truth; here we have glam ("What She Said") Elvis ("Rusholme Ruffians") and his beloved Chic ("Barbarism Begins At Home").

To compliment this, Morrissey tosses off some of his spryest lines ('I'd like to drop my trousers to the world . . . I'm a man of means, of slender means' is one of his best). OK, it's not all fab – the title track, which did much for vegetarianism in the 80s is still as maudlin as ever; and no matter how great the rhythm section are, the extended workout on "Barbarism Begins At Home" is frankly dull.

Whichever way you assess it, however, there was no other British group making music quite like this in 1985. 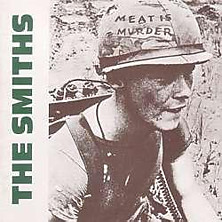