Soft rocker, acoustic alien, folk fantasist and blues boy are just a few of the nicknames you may fancy labelling Newton Faulkner. And if his personality is as laidback as his sound, the Surrey-bred Brit probably couldn’t care less what you tag him. As long as it’s not cheesy.


Hand Built By Robots, Faulkner’s stripped-back debut LP, introduces a well-travelled 21-year-old, accompanied by little more than his calming vocal and handmade guitar. The sound is soothing, the vibe genteel, the lyrics often profound, sometimes humorous. Unlike many soft rock albums, where monotony too often takes over, Hand Built… brims with subtle yet welcomed variety.


From the off, you know you’re in for an album that strays from the norm. Faulkner’s spectacular guitar solo intro blends perfectly in to feel-good number “To The Light”- with its high-speed lyrics, positive message, unusual breaks and hooky melody, it will undoubtedly dazzle. Move on to “I Need Something” and you’ll unexpectedly stumble upon space age wizardry mingled with classic acoustic guitar.


He may have seemingly come out of nowhere to spectacularly bag support slots for James Morrison and Paulo Nutini, play Glastonbury and be playlisted on Radio 1, but one’s thing’s clear: Newton Faulkner is here to stay. 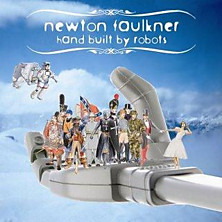